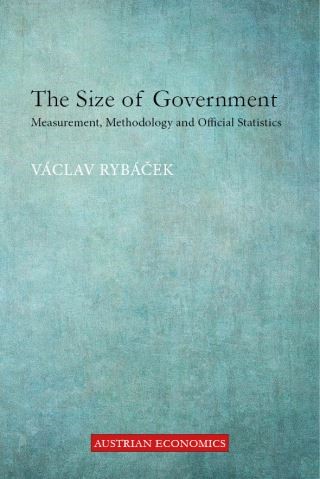 The Size of Government

Over recent decades, economies across the world have seen substantial growth in government regulation and intervention that goes beyond the scope given to it by the budget. The growing economic power of government has prompted many studies to seek to establish the optimum size of government and how it might relate to economic growth, productivity and inflation. Vaclav Rybacek examines how these studies have used national accounts and officially published statistics to invariably underestimate the size of government, which has lead to erroneous economic policy recommendations and ultimately to an unrealistic assessment of a government’s ability to meet its debts. The author shows how the methodology of macroeconomic statistics has failed to keep pace with the expansion of government and has misallocated, for example, many public producers in the field of financial services, to the corporate sector. Even central banks conducting government policy are shown to stand outside official figures on the size of government. Similarly, when showing the relative size of government, the choice of denominator, such as nominal GDP, can further lead to undervaluing figures on government size. Drawing on Austrian economic theory, in particular in relation to market operation, the book offers a more robust methodology for the measurement of government, one based on both stocks and flows under the direct control of government. Using data from the European Union, he is able to recalculate fiscal indicators and the denominator, GDP, to present a more appropriate set of data for the analysis of public sector dynamics in the majority of countries in the EU.

Vaclav Rybacek: Vaclav Rybacek is an Assistant Professor at Jan Evangelista Purkyně University in Ústí nad Labem and Director of the Macroeconomic Statistics Section at the Czech Statistical Office.