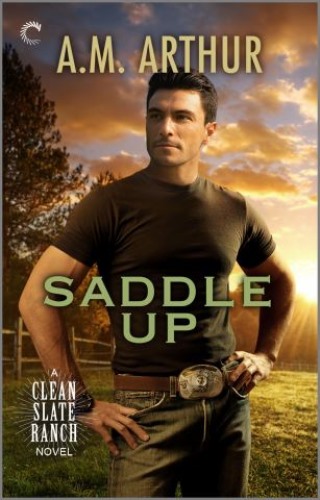 Reyes Caldero keeps his past buried deep and his emotions buried deeper. But what he doesn’t say he always makes up for with his actions. When the hot chef he once saved from an abusive ex turns up at Clean Slate Ranch, the quiet cowboy is happy to act on their sizzling chemistry, even if he’s not ready to share his secrets—or his heart.

Miles Arlington needs to get the hell out of San Francisco, and heading north for a job near Clean Slate Ranch seems like just the thing. It doesn’t hurt that his secret crush slash onetime rescuer happens to work at the ranch. Miles has never been one for the outdoors, but the superhot Reyes has him ready to saddle up.

Reyes is happy to keep things casual, even though his heart has other ideas. And when Miles is forced to confront his past again, Reyes and Miles will have to put all their trust in each other if they want any chance at building a future together.

A.M. Arthur: A.M. Arthur was born and raised in the same kind of small town she likes to write about, a stone's throw from both the ocean and generational farmland. She's been writing stories in her head since she was a child and scribbling them down nearly as long. When not exorcising the voices in her head, A.M. can be found in the kitchen experimenting with food and trying not to poison herself or others.