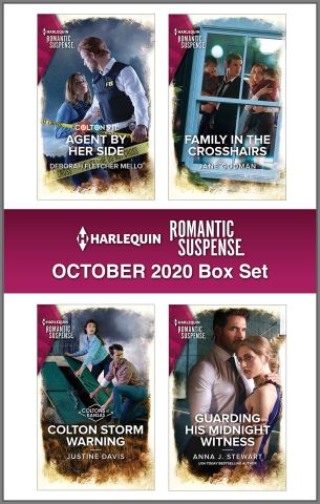 Looking for heart-racing romance and breathless suspense? Want stories filled with life-and-death situations that cause sparks to fly between adventurous, strong women and brave, powerful men?

Harlequin® Romantic Suspense brings you all that and more with four new full-length titles in one collection!

COLTON 911: AGENT BY HER SIDE (A Colton 911: Grand Rapids novel)
by Deborah Fletcher Mello
FBI agent Cooper Winston is determined to take down a deadly pyramid scheme and PI Kiely Colton has the information to make that happen. She’s not going to let him push her out of the search, but when danger flares, they’re forced to rely on each other and face the attraction they both fear.

COLTON STORM WARNING (A Coltons of Kansas novel)
by Justine Davis
The last thing security expert Ty Colton wants is to play bodyguard for a spoiled heiress. But just as he begins to discover that there’s more to Ashley Hart than meets the eye, the threats against her are acted on—and the very weather itself tries to tear them apart.

FAMILY IN THE CROSSHAIRS (A Sons of Stillwater novel)
by Jane Godman
Dr. Leon Sinclair is trying to rebuild his life when Dr. Flora Monroe arrives in town and threatens his job…and his peace of mind. But Flora and her twins are in danger and Leon must face the demons of his past in order to keep them safe.

GUARDING HIS MIDNIGHT WITNESS (An Honor Bound novel)
by Anna J. Stewart
The last time he lost a witness, Detective Jack McTavish nearly lost his job. Now, protecting Greta Renault, an artist who witnessed a murder, is his top priority. As he’s forced to choose between believing her and saving his career, Jack’s decision could make the difference between life and death.

Deborah Fletcher Mello: Deborah Fletcher Mello has been writing since forever and can’t imagine herself doing anything else. Her first romance novel, Take Me to Heart, earned her a 2004 Romance Slam Jam nomination for Best New Author, and in 2009, she won an RT Reviewer’s Choice Award for her ninth novel, Tame a Wild Stallion. Born and raised in Connecticut, Deborah now considers home to be wherever the moment moves her.|||Justine Davis lives on Puget Sound in Washington State, watching big ships and the occasional submarine go by, and sharing the neighborhood with assorted wildlife, including a pair of bald eagles, deer, a bear or two, and a tailless raccoon. In the few hours when she's not planning, plotting, or writing her next book, her favorite things are photography, knitting her way through a huge yarn stash, and driving her restored 1967 Corvette roadster—top down, of course.|||
Jane Godman is a Romantic Novelists’ Award winner and Daphne du Maurier Award finalist. She enjoys traveling and spending time with her family, including her dogs, Gravy and Vera.

|||USA Today and national bestselling author Anna J Stewart can't remember a time she didn't have a book in her hands or a story in her head. Early obsessions with Star Wars, Star Trek, and Wonder Woman set her on the path to creating sweet to sexy pulse-pounding romances for her independent heroines. Anna lives in Northern California where she deals with a serious Supernatural addiction and an overly affectionate cat named Snickers.