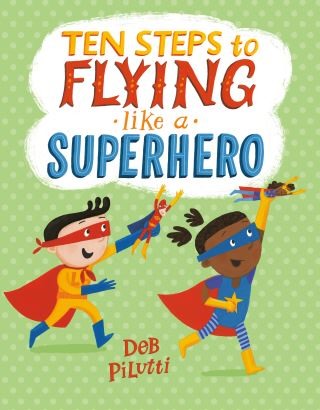 In Ten Steps to Flying Like a Superhero, Lava Boy teaches his superhero action figure, Captain Magma, how to fly in Deb Pilutti's soaring picture book companion to Ten Rules for Being a Superhero.

Lava Boy and his favorite toy, Captain Magma, have saved the day many times. But there’s one superhero skill they haven’t mastered yet: the ability to fly. It shouldn’t be too hard for Captain Magma and Lava Boy to figure out. But it’s going to take a new set of rules and some help from the brave Star Girl (and her action figure, Meteor Shower) before these superheroes actually reach new heights.

This clever gender inclusive story takes young readers on an adventure—learning lessons in friendship and how to fly like a superhero.

Deb Pilutti: Deb Pilutti is an award-winning illustrator and designer. She is the creator of Ten Rules for Being a Superhero, Ten Steps for Flying Like a Superhero, and The Secrets of Ninja School, and lives in Ann Arbor, Michigan.