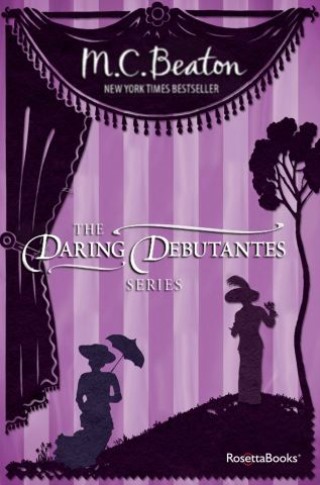 Immerse yourself in the wonderful whirl of historical romance with this seven-volume collection from the New York Times bestselling author.

The seven heroines of the Daring Debutantes Collection set out to conquer London’s glittering high society and marriage mart. These headstrong women cannot help but keep the most wanted bachelors dangling on a string, but will they find a husband or lose themselves in the game?

Henrietta (Book 1): With some unexpected wealth, Henrietta embarks on a quest to win over London’s high society—and the heart of Lord Beau Reckford.

Penelope (Book 3): Golden-haired and fresh from the country, Penelope has stolen the heart of a desirable earl—but keeping him is another matter . . .

Lucy (Book 4): With a wily old butler pretending to be her father, lady’s maid Lucy Balfour attempts to win the favor of Andrew, Viscount Harvey.

Annabelle (Book 5): Annabelle Quennell gets a chance at a London Season to snare a wealthy husband. But before she sets off, a mystical woman predicts trouble ahead . . .

Kitty (Book 6): Kitty Harrison, once achingly poor, is now a wealthy heiress. But she realizes that to win the man she loves, she’ll have to learn to play the game.

Sally (Book 7): Eighteen-year-old Sally Blane, posing as a lovelorn magazine columnist, is summoned to prevent the Duchess of Dartware’s son from a terrible marriage.