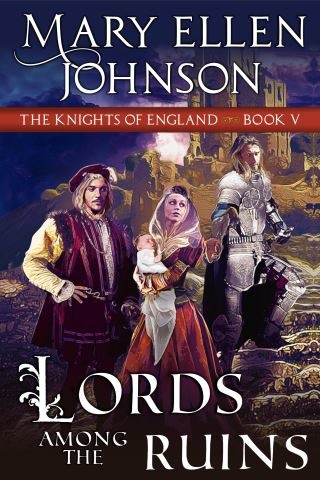 Lords Among the Ruins (Knights of England Series, Book 5)

As the Fourteenth-Century Closes, So Does the Rule of England's Most Tyrannical Monarch in the Medieval Historical, LORDS AMONG THE RUINS, by Mary Ellen Johnson

Medieval England from the Aftermath of 1381 Peasants’ Revolt to the Deposition and Murder of Richard II on 14 Feb 1400
As the former boy king, Richard II, approaches his third decade, Matthew Hart and England’s other great lords struggle to deflect his more destructive impulses, which increasingly threaten the kingdom.
Amidst attempted assassinations, growing civil war and political intrigue, Matthew Hart, his beloved wife, Margery Watson, and their offspring live and love and war their way through the last years of the fourteenth century, seeing the deposition and murder of England’s most tyrannical monarch.

Publisher's Note: Readers with a passion for history will appreciate the author's penchant for detail and accuracy. In keeping with the era, this story contains scenes of brutality which are true to the time and man's timeless inhumanity. There are a limited number of sexual scenes and NO use of modern vulgarity.

From the Author: There is nothing new under the sun. If we seek to understand today’s events, history will always provide the answer. By 1398 the megalomaniacal Richard II had consolidated his power, executed or banished all his enemies and destroyed all those who might speak out in opposition to him. Two years later Richard was deposed, thrown into a dungeon in Pontefract Castle and starved to death. Lessons: We can never predict the future; actions always have unintended consequences; we sow the seeds of our own destruction and payback’s a bitch!

THE KNIGHTS OF ENGLAND, in series order
The Lion and the Leopard
A Knight There Was
Within A Forest Dark
A Child Upon The Throne
Lords Among the Ruins

Mary Ellen Johnson: Mary Ellen Johnson’s writing career was sparked by her passion for Medieval England. Her first medieval historical, The Lion and the Leopard, was followed by The Landlord’s Black-Eyed Daughter, a historical novel based on the Alfred Noyes poem, “The Highwayman.” (Published under the pseudonym, Mary Ellen Dennis.) Landlord was chosen as one of the top 100 historical romances of 2013.

After taking a twenty year detour in a quixotic quest to change the world--rather like Arthurian knights’ quests to find the holy grail, which ended in similar failure--Mary Ellen has happily returned to historical fiction writing and her favorite time period, the tumultuous fourteenth century. Her five book series, Knights of England, follows the fortunes of the characters (and their progeny) introduced in The Lion and the Leopard through the Black Death, the reign of that most gloriously medieval of monarchs, Edward III, the 1381 Peasants’ Revolt, and ends with the deposition and murder of Richard II in 1399.

There is nothing Mary Ellen loves more than bringing Medieval England alive for the reader. She particularly enjoys researching battles, campaigns, the daily lives of both lord and peasant, and trying to figure out our ancestors’ thought processes, particularly how they viewed their world. Oh, and did she mention the castles and cathedrals? Mary Ellen likes to say her favorite place in all the world is standing before the tomb of the Black Prince in Canterbury Cathedral. (Hyperbole, of course, since Mary Ellen is not that well-traveled and her favorite places are probably wherever her kids and grandkids reside.)

However--and the very recounting gives her chills--a distant cousin recently shared the results of her years-long genealogical research on the family tree. When flipping back and back through the centuries, Mary Ellen began finding names that were hauntingly familiar--John of Gaunt, Edward the Black Prince, Edward II, Edward III, even Richard the Lionheart! All the historical characters she’s spent a lifetime reading and writing about! How can that be? Genetic memory? Reincarnation? She has no idea but you can bet she’ll be exploring the possibilities in future novels!

In the meantime, Mary Ellen hopes you’ll enjoy reading The Lion and the Leopard, A Knight There Was, Within a Forest Dark and Lords Among the Ruins as much as she’s enjoyed writing them.