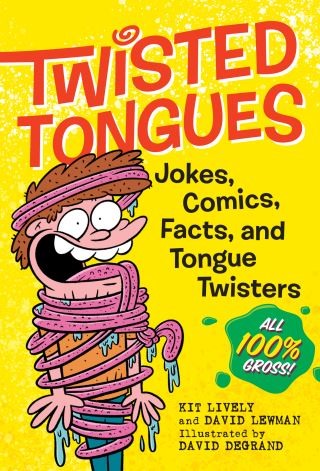 Featuring the funniest things in life––like barf, drool, mucus, pus, and gas––Twisted Tongues is an excellent collection of more than 150 tongue twisters, all sure to gross out your parents.

Use the Twist Level meters to gauge your skill and challenge others in mouth-mangling twister games. Then enjoy riddles told by two talking boogers!

There’s loads to learn, too: Did you know that ancient Romans scraped off their skin’s oil and sweat and sold it as medicine? Ewwwww.

Kit Lively:
Grosser than ANYTHING in his books, Kit Lively lives in a small house made entirely of earwax. Not his own earwax, of course; that would be weird. He has written lots and lots of jokes for MAD magazine, Cracked, SpongeBob Comics, and many other humor magazines. Incredibly, he has a wife (Julie).
|||
David Lewman has written over 135 books, including joke books and chapter books starring SpongeBob, Minions, Teenage Mutant Ninja Turtles, Trolls, and the characters from Jurassic World. He’s also written comics and scripts for TV shows. He thinks the grossest thing in the world is being mean.